This article reasons that it is essential to diversify your digital marketing efforts…. But don’t let that put you off. There’ll be charts, a little bit of conspiracy theorising (not to the level of The Flat Earth Society, mind) and some cynicism. Something for everyone. It’ll be a bit like how Brookside used to be, but with practical outcomes and charts.

Before we go any further, let’s define some terms just to make sure everyone’s on board:

An impression is the number of times an ad is shown to a user.

CPC, or Cost per Click, is the cost an advertiser pays once their ad has been clicked on.

I know from running my own PPC campaigns that clicks have become more costly each year, despite no drop off in click-through rate or Quality Score. Recently I’ve read that CPCs on Google are at an all-time high, so I went to the source and got some data.

Here, straight from Google, is the mobile CPC trends for…Wigs & Wig Accessories. Bear with me. 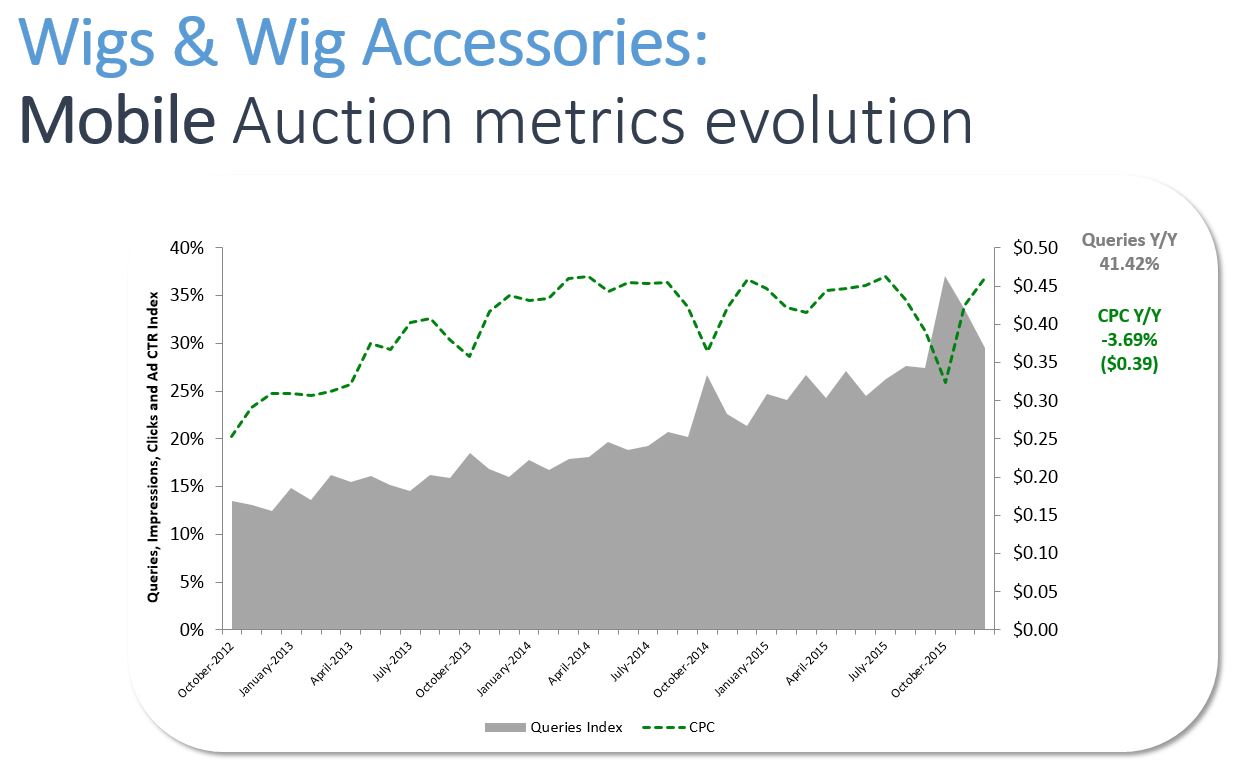 It shows how mobile CPC has grown since 2012 and it’s not just the wig industry seeing this pattern. Here are eight charts showing the trends in some randomly chosen verticals including Industrial Electronics, Antique Furniture, Spas and beyond. 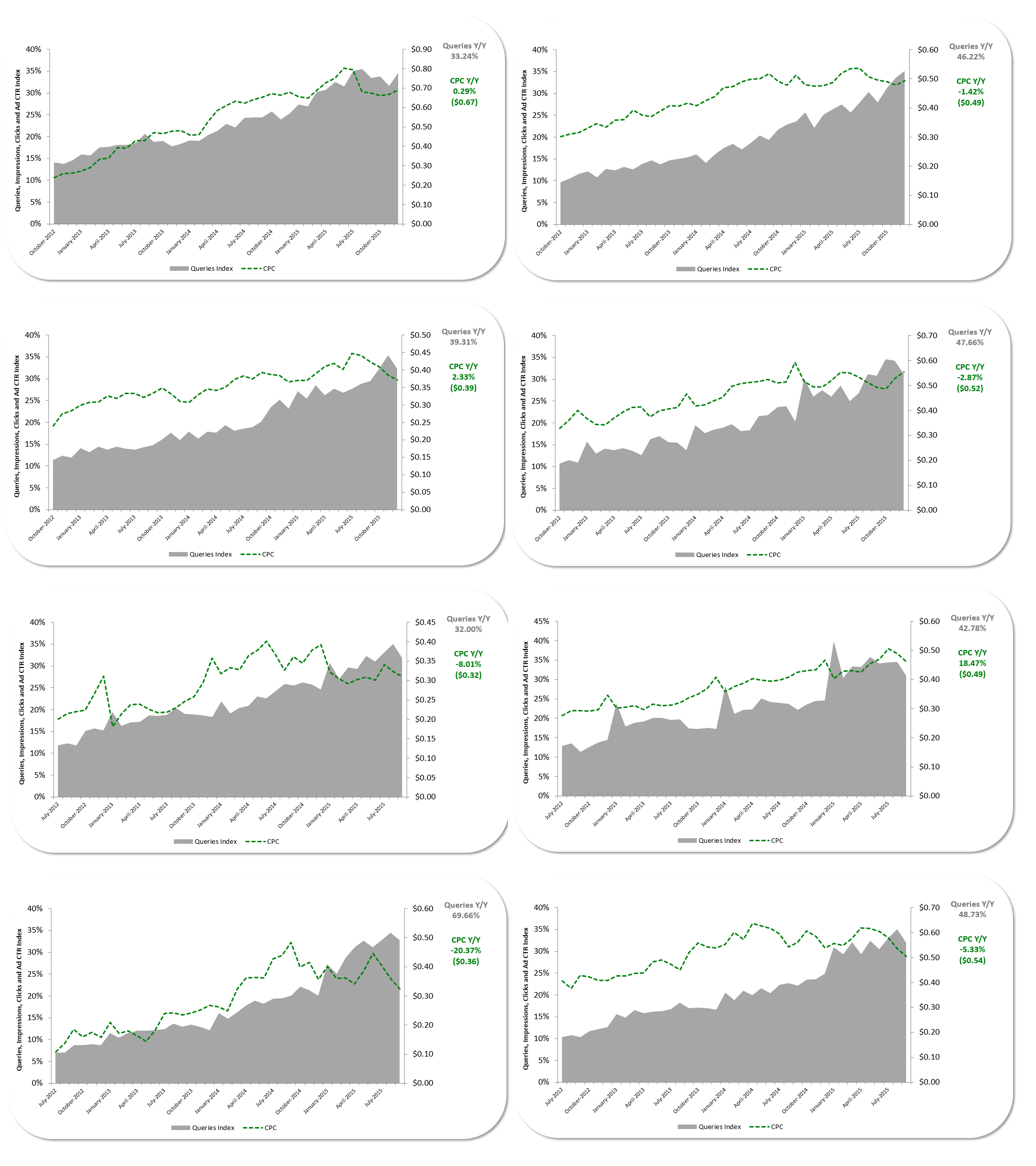 I’m in no doubt that more companies are utilising mobile than in 2012, therefore there is more competition and, consequently, higher CPCs in each market. However, I’ve found that the CPC trend is mirrored on desktop too, but the other figures aren’t necessarily growing. Here are two final charts showing the CPC, impressions and queries trends for the Wigs and Hairdressing industries. 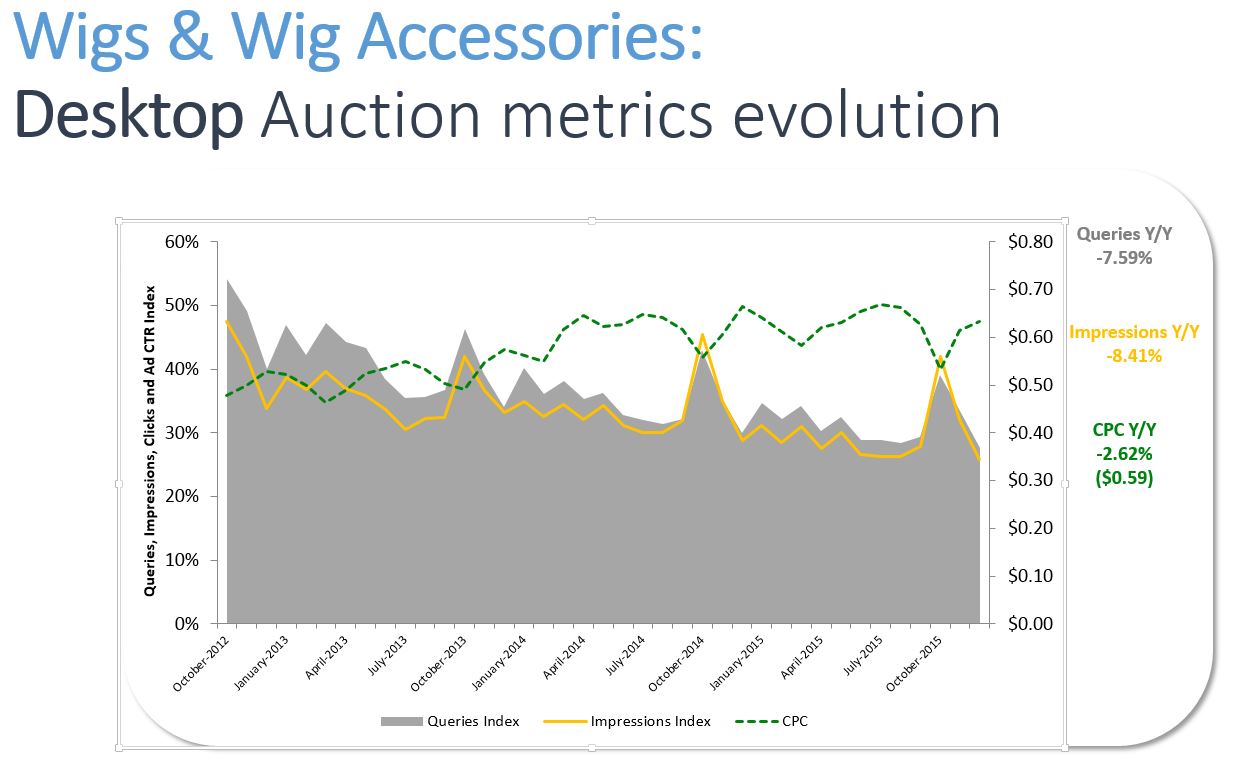 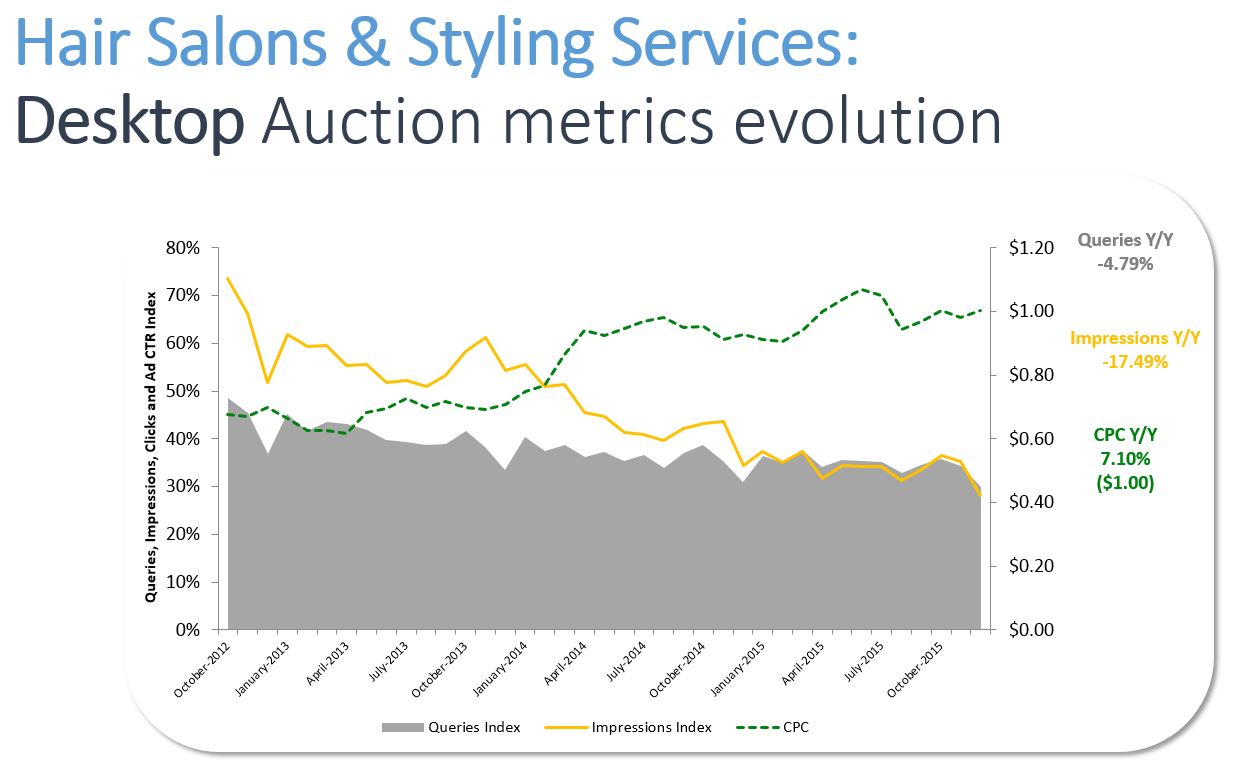 In these charts, you can see that while search queries & impressions are declining, CPCs are still rising. It’s the same in all the desktop charts I received. Unless you want to ask for them, you'll just have to trust me.

Now, I’m not saying that Google is artificially inflating its own prices based on a lack of direct competition and regulation… ok, you got me. I am. But what I’m also saying is unless your product prices have increased at the same rate as your CPCs, chances are your profit per unit has diminished. If this hasn’t happened or isn’t likely to, you’ll need to diversify your advertising.

There are a huge number of platforms available to the average advertiser. The two in which there is a real opportunity, due to relatively low costs, easy setups and the average person knowing how the platform works, are Facebook and Twitter.

The way people interact with these platforms, coupled with the huge improvements the sites have made to their own advertisement offering means that, they not only allow genuine and significant returns, they’re practically essential in building and defining your brand. They also happen to have a huge mobile audience.

Facebook has 1.038 billion daily active users. It isn’t going away, its users aren’t going away and while the average CPC for Facebook is under £1, advertisers can’t afford to either.

One key difference is that your audience on this platform is in a different mode to those on Google i.e. the latter are in search mode but the former are not. So, to succeed on social platforms, advertisers need to be creative not just in ad copy, but with who they target, how and why.

For example, if you’re a world-weary, disappointed idealist, you’ll have noticed the return to power of the conservative party. Following re-election, they openly discussed the advantage social media advertising gave them. Craig Elder, a digital strategist on the campaign, said:

The recent Buzzfeed article that resurfaced this quote also reported that “the Conservatives also spent £312,033 on Google advertising, against Labour’s £371”.

If you’re thinking “well it’s easy to see success with an engaging subject”, I understand—I really do. But if companies actually offer something to their customers and are creative with how they advertise it, they’ll absolutely be able to drive engagement and traffic.

This can be done in a number of ways; from delivering insights on important industry topics and running games or competitions to being comical or just not shying away from controversial opinion. All the above can, will and do work.

Don’t dismiss social as a location for prying and poking. If you’re engaging and creative it will offer a useful opportunity which not only delivers traffic and conversions, but also establishes and builds your brand.

It is not the strongest of the species that survives, nor is it the most intelligent. It is the one that is most adaptable to change, and that, dear reader, is why there’s no more Brookside.