I often see and hear that print is dead, usually shortly before boarding a train and flicking through the free copy of the Metro. I try to rationalise that the advertisements and paywalls that shields content are soon to be the main revenue stream for newspapers and magazines, usually before forking out a fiver for a copy of PC Gamer.

I’m not right, but I’m not wrong either. October 2015 only saw one UK newspaper to grow its’ print circulation, The Times. Meanwhile The Guardian suffered a decline of almost 7 percent year on year, the Daily Mail was hit with a 4 percent decrease and The Independent saw print circulation decrease by 8 percent.

In contrast to this, The Guardian’s website saw an increase of 31 percent year on year in the same month, while the Daily Express saw 53 percent. So as Britain’s ‘Fourth Estate’ continues to adapt to the digital age, how has the way we consume news changed alongside it?

One of the biggest changes we’ve seen due to social media is the rise of civilian journalism. Journalism was once reserved for those whose shorthand exceeds 100 words per minute, but now those with a phone and a twitter account can easily report the news.

“The people formerly known as the audience”

Examples can be found far and wide, but The Arab Spring perfectly summarises its importance in modern society. The instant documentation of events as they unfolded, mostly across Twitter, gave consumers a completely different way to consume news. The news breaking in Egypt, Libya and beyond wasn’t filtered through an agency, paper or channel, but delivered direct from the source.

The influx of citizen journalists is unpredictable and unmoderated, but it shouldn’t be seen as a threat - they can even work in tandem with the professionals. After a TV blackout of coverage of any aspect of the Arab Spring, the only footage came from a protester streaming from his phone with over 12,000 viewers.

The revolution was televised, but it was via a smartphone.

Does this mean the instantaneous avenues of news the digital world has introduced are going to make the professional journalists obsolete? No. While citizens were uploading their videos, images and opinions, they often only showed their own view. There was no investigation or further context and this is where journalists usually excel.

“The material led investigations, for example, when a tank appeared to fire on a school early in the Egyptian revolution. Journalists found there were escaped prisoners hiding in the building.”

So how does civilian journalism influence digital marketers? Well, while the press may have an unofficial motto - ‘If it bleeds it reads’ - the scope of those posting on Twitter can be much wider.

While it may not have started as a newsworthy story, the hashtag #GiveGregTheHoliday blew up on Twitter, eventually gaining coverage from Buzzfeed, The Daily Mail and BBC to name but a few.

Companies around the world saw an opportunity to use the hashtag to promote their brands: ELEMIS sent a gift basket to Greg, VO5 provided free hair products and TrekAmerica gave Greg free flights to Vegas.

However, it’s important to note that these worked well as they were relevant and generous, sometimes brands try to piggyback onto trends where they don’t belong and it rarely ends well.

Greg do you need to learn about #Soundproofing before your holiday? Find out more here: http://t.co/GYHkuuY4Dn #givegregtheholiday

Ultimately, Greg gave all his free swag to a charity close to his heart, but the brands still got exposure.

As we spend more and more time online posting our opinions and carefully selecting who we follow, we seem to be retreating more and more into our filtered bubbles. It’s not all our fault, it’s not like we want to neglect the news, its more that our digital influences don’t think we should – or at least don’t want to - be presented with certain content.

Our search engines and social networks believe that the content we’re exposed to should be personalised to our likes, interests and cookies (not the edible kind.) Back in 2011, Eli Pariser delivered a speech arguing that our comfortable filter bubbles will ultimately be bad for us.

Cast your mind back to the General Election. While everyone on my Facebook feed seemed to be a #Milifan, Labour suffered one of their worst ever defeats. The personalisation offered by social networks means we only see the content that our algorithmic overlords think is relevant.

While this is a great way to immerse ourselves in the kind of content we like to see, whether that’s breaking news or fluffy kittens, it only offers a narrow view of the world around us. As David Cameron said at the Conservative Party conference:

The potential problem with how we consume news digitally is through our networks and how we tend to surround ourselves with those who share our opinions. Apple’s news app allows you to select what news you want to see, this is what mine looks like: 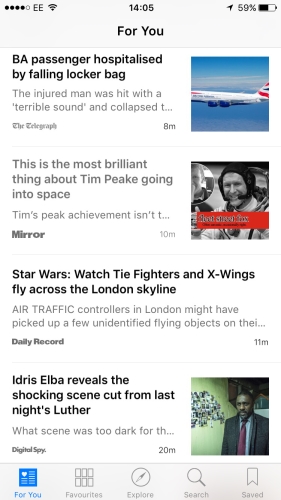 Star Wars, TV shows and falling locker bags make-up the first page of the news Apple has selected for me. There’s nothing about the US elections, despite Donald Trump wanting to shut down parts of the Internet, nor is there anything about the major drop in UK unemployment.

Google does something similar, with all the data they have about us they probably know what news we want to see better than we do. Once again keeping us in a filtered bubble.

While this filtered view is great for keeping up with interests, is it providing us with just a snapshot of life while the bigger picture is hidden away?

As the digital age marches on, there’s no denying it has revolutionised how we consume news. Ideas from simple live blogging events to massive multimedia projects like The Guardian’s ‘Firestorm’ coverage have added new dimensions to the role of a journalist, changing it, I’d argue, for the better.

Digital gives all of us the power to contribute and digest news that interests us instantly. It’s hard to argue against it, so long as we step out of our filtered view from time to time and experience the rest of the world. The good, the bad and the ugly.