Should Google be relying on Apple to reinvent the iPad? | Venn Digital

We all know that browsing the web via a mobile device is now the norm and exceeded desktop browsing as of last year. But that news has been and gone.

Instead, I want to look at the forgotten device – the tablet and what Google and Apple are doing to save the device from a very early death.

Tablets have never fully been a replacement for a desktop and definitely have never replaced mobile, however most device/browser measurement sites group mobile and tablet usage into the same bracket, making it difficult to see the percentage of people using the web via tablet.

Even the laggards are going to start and get online via mobile in some shape or form soon, so this gap will only grow further

Its the grouping of these devices that I think is causing some confusion.

Deloitte suggested the tablet bubble has burst in their 2017 technology predictions, stating that fewer than 165 million tablet computers will be sold worldwide — down by 10 percent on 2016. As mobile phones are getting larger and desktops are getting smaller, we are squeezing the gap where tablets once sat and we would rather use a phablet or standard mobile to perform a similar task.

This was backed up by a sector report from Google that I read recently, which mirrored this decline, when looking at YoY query growth for Q4 2015 vs Q4 2016. 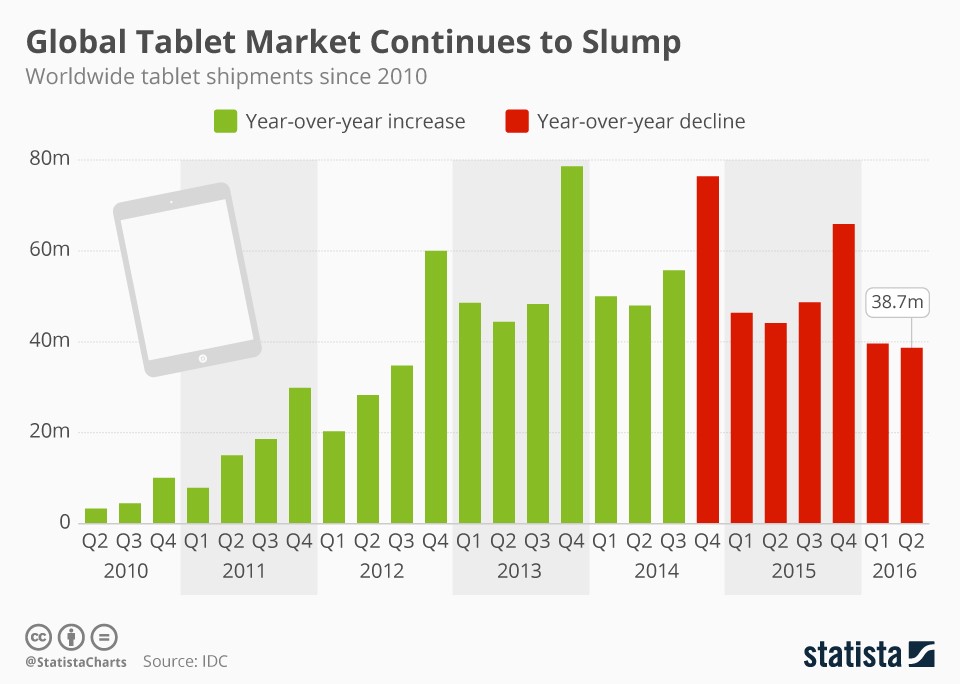 Why would Google and Alphabet care about this?

Chrome and Android completely dominate their respective markets, we know that. Google own desktop and mobile markets through the software they provide to get users onto their search engine. But the tablet (or hardware) market isn’t something they have ever lead.

And herein lies the problem. A lack of ingenuity in the tablet market may have pushed mobiles growth. But 90% of mobile time is spent in apps, which is, to some extent, out of Googles most traditional and most profitable ad realm. I.e. Mobile users are less likely to click on ads via SERPs.

90% of the time you are in an app when using your mobile device. That’s a lot of time to use Facebook & not need Googles services.

There is also a clear pattern between mobile usage growth and the rise of Facebook ad revenue as shown in the graphs below, which can only impact on Googles very fat bank account.

Tablets are synonymous with Apple; Synonymous with Steve Jobs. And although tablet usage is on a clear decline, consumers still search for Apples product, rather than the generic term, as shown below.

Apple broke the rule of the old adage — “be the first, or be the best”, as they aren’t either in this instance yet are still the market leader.

‘The first’ was Bill Gates, who invented the first tablet back in 2000, with Jobs not releasing his version until a decade later. But this didn’t stop Business Insider stating-

Apple’s iPad is a revolutionary product that is cratering the PC industry.

Cratering the industry that precedes a product, is a big vote for ‘the best’.

However, the best doesn't always mean the most popular, which is the case when you look at physical tablet sales. Android dominate here through multiple hardware manufacturers using Google software, compared to Apple who only use their own software in their hardware. It’s clear that Android strongly relies on lots of other manufacturers to push its software to mass market.

The iPad has an incredibly intuitive UI that is obviously based on the very successful iPhone. But what Apple haven’t done is develop this any further.

They released iterations of the original iPad, that the general public have bought, but let’s be honest, they have re-released the same old model with a new retina display and an updated iOS. Who cares?

iPad innovation stopped the day it was launched

A comment from Tech Radar on Apples latest release stated -

Apples ethos is to ‘think different’, but their innovation of the tablet stopped the day it was first released, 3rd April 2010.

Fast forward to 2017 and tablet sales are in a known decline. So it makes you wonder why Apple have released a £550 iPad Pro, indicating a move away from mass market. The original iPad cost around £399 which was perfect product placement (I know you can get a budget version at a similar price today but who wants budget, when a premium product used to cost a similar price?)

£550 is an awful lot of money to spend on a pause of ingenuity.

Apple have stopped consumers from getting excited about the tablet.

When Apple release an iPad at their typically high price, it filters through the markets until you get to lower end manufacturers creating a similar model functioning on Googles Android operating system. So those customers that can’t afford an iPad, get a budget model from another manufacturer. But when innovators and adopters aren’t fed anything new and exciting from the best in the sector (Apple), the lower spenders in the ‘early majority’ market aren’t going to be interested in buying an android tablet at a lower price point.

Where does this leave the tablet?

Apple are in a position where they can command the tablet market. If they don’t innovate (which they aren’t), then the entire buying market are going to eventually lose interest.

Only one company can be the first, but being the best should be a constant evolution. As the richest company in the world, Google are unique in that they are one of only a handful of companies that have the power to create something to get consumers interested in the market again, and surely its in their best interest to keep people off of their mobile devices/Facebook and back onto SERPs and Adwords?

NOTE. Since this post was originally published, there have been some valuable comments made on Reddit that assess the future of the tablet from a very different perspective to mine. Could Chrome be the future of Google tablets?