Should You be Worried About Google’s Imminent Update? | Venn Digital

Throughout January publications including The SEM Post and Search Engine Roundtable have been reporting that Google’s latest update to the Penguin algorithm is ready to go and could hit the web in a matter of weeks.

The update will allow Penguin to run in real-time rather than periodically. This means website owners will need to act upon negative links as soon as possible or risk seeing a drop in their organic traffic levels. This also means that any websites unfortunate enough to be victims of link spam could potentially be taken out of search results before they even know they have been targeted.

Google’s Penguin algorithm has been well documented by the digital community since it was released in 2012. It is a major part of Google’s search algorithm that specifically focuses on websites’ backlink profiles and whether they are trying to manipulate search engine results.

Some of the key things the Penguin algorithm looks out for include paying for link placements, manipulating anchor text and building irrelevant links across the web. Any websites found to be doing any of the above are manually or algorithmically penalised.

Up until now, algorithmic penalties and their removal could only happen when Penguin ran in Google’s algorithm. The last time this happened was October 2014. Over the next few weeks we are expecting Google will release this as a real-time algorithm, making Penguin a constant threat to a website’s organic visibility.

Penguin penalties have caused numerous sites to lose vast amounts of traffic and the majority of website owners were originally only able to get out of penalties by removing backlinks that were deemed to be unnatural and then waiting for the algorithm to roll again.

How seriously Google treats link manipulation can be seen through its penalisation of major brands such as JC Penney in 2011 and Interflora in 2013, when the florist was found to be buying links in advertorials. The below graph shows just how much organic visibility Interflora lost when Google hit them with Penguin: 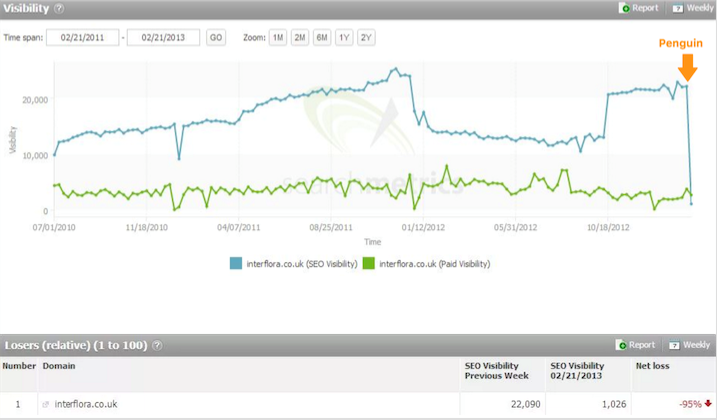 Interflora lost nearly all of their organic visibility and relied on paid search to ensure they were still generating business from Google. The cost of missing out on Google searches could have an untold cost on any online business.

How can you avoid a visit from The Penguin?

Unless you are happy to be put at risk of the most dangerous penguin since Feathers McGraw’s appeared in Wallace and Gromit, steering clear from a penalty should be a top priority for your business.

Fortunately, there are simple ways to avoid the wrath of Google:

SEO experts across the web have been talking about how Penguin’s integration into Google’s real-time algorithms could drop this quarter, but that’s no reason to run to panic stations.

@mrjamiedodd I'll go with weeks. We're aiming for launching penguin this quarter, but we don't have a more precise timeframe.

Though Gary Illyes, a webmaster trends analyst at Google, confirms that the update is scheduled to launch in weeks and not months, websites still have time to get their backlinks in order.