Online ads have a bad rep. A lot of them deserve it and their presence has led to the widespread use of blocking software, but genuine businesses are suffering as a consequence. This post looks at what ad blockers are, what a recent update could mean for paid advertising and what we can do to make online ads better.

An ad blocker is an installable extension for web browsers that prevents advertising from appearing on websites. They usually work by comparing a list of known ads with the ads that are shown in the website. Anything listed is blocked or, perhaps more accurately, hidden from your browser.

Earlier this year, Adblock Plus announced it had been downloaded over 500 million times since its launch in 2006. This kind of software is nothing new, so you may be asking why I’ve decided to write about it now.

Well, the iOS 9 update released late last year was the first to allow ads to be blocked in Safari, the iPhone’s default browser. Now, you know when Apple does something new everybody goes crazy, but—whether you think this is Apple’s attempt at harming Google’s ad revenue or not—this is a significant move.

Statista puts the current market share of Apple’s iOS in the UK at 43.5 percent. If you join this figure with the upward trends in mobile phone browsing and searches, it’s easy to see how Safari’s new blocking permission could have disastrous consequences for paid search platforms.

To understand the uptake of ad blockers and the possible effect of this change, we need to look at why they’re popular in the first place.

The Rise of Ad Blockers 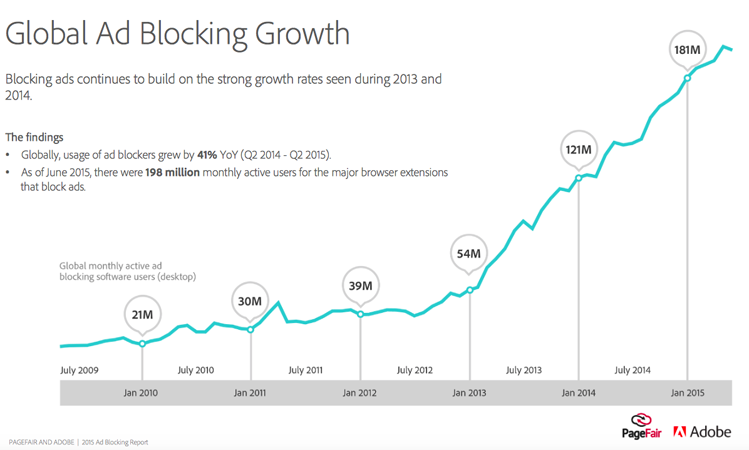 In this graph (produced by WordStream) we can see how the number of ad blocker software activations has been increasing. We don’t need a graph to say that the amount of opportunities for search and display ads has also been going up.

The success of this software comes because the internet is full of annoying, intrusive Ads that don’t help users’ browsing or improve their search experience. We’ve all seen the seedy, hard-to-close pop-ups that exist outside of more responsible, targeted advertising platforms. Who wouldn’t want to block these?

Sure, suspect video streaming sites are a natural home for irritating ads that are impossible to close without another window, tab or ad firing up—but they aren’t just found on this kind of site. How many times have you gone to a TV channel’s or newspaper’s website and been greeted by a full page ad promoting anything from razors and perfume to a musician you hate.

That people want to block these kind of ads shouldn’t come as a shock. The problem is that it often blocks any type of digital advertising, including Google AdWords and Bing Ads. While some people are happy to see the back of these, they are far from invasive or malicious.

The Ads vs The Blockers

I think one of the most important questions is whether ad blockers block display ads. Unfortunately, the answer to this question is ambiguous. Some do, others don’t. Some are customisable, others aren’t.

Most blockers have a white list in some form, but whether or not your ads are included is not based on ad quality or relevance. Google, Microsoft and Amazon are among the organisations who are paying to get their sites past these ad barricades. In 2013, before Google settled with Adblock Plus, PageFair estimated that ad blocking cost Google as much as $887 million per quarter, so it was unthinkable for them not to look for another option.

Some techniques have more of a case to be spared than others though. Take remarketing. This kind of ad only targets users that have visited a particular site or page and typically displays a relevant message on the periphery of pages and applications, so does it deserve to be uniformly blocked?

There are also countless websites, blogs and forums that survive thanks to ad revenue. If the majority of users have ad block software installed and all ads are hidden, this could lead to reductions in incomes and even the closure of websites. If display advertising becomes unfeasible, it would affect more than the big platforms’ bottom lines.

Many websites haven taken steps to counter this. Some ask for small donations to remove all ads, but others have adopted systems that detect whether users have an ad blocker activated and prevent them from seeing content unless they deactivate it. To get around this, people are installing additional software that intercepts ad blocker defences, so they can see content without the need to deactivate their software.

So, people are now blocking the software that detects and attempts to block ad blocking software.

Imagine what we could do if we tried to fix the problems instead of putting them out of sight.

What can we do?

I think the best way to avoid the possible damage that this kind of software can do to paid search on the whole is to get a consensus between businesses, paid ad platforms, ad blocker developers and users.

The different sides obviously have different angles but they share a common ground—Adblock Plus even undersign the acceptable ads initiative. If all the parts in this sector can come to an agreement on how to reduce intrusive advertising and define what helpful, beneficial ads should look like, they could all come out winners.

Users would no longer be annoyed by ads that destroy their surfing experience, but still receive valid, pertinent messages in line with their interests.

Businesses would be able to work on legitimate ads in the knowledge that they won’t be blindly blocked, wasting their budget in the process.

Paid ad platforms would be happy because instead of being wiped out, their ads could actually become more effective and appealing,

Ad blocker developers, while having to accept some ground, would have achieved their ultimate mission of improving users’ experiences. They will also have made online advertising better, instead of just trying to hide it.