The EU referendum, the moment when Britain runs into the arms of the golden EU stars or decides that we’re going it alone, is almost upon us.

Are you weary about all the campaigning and just looking forward to a resolution? Have you been following Boris’ moves without fail? However you or the people you know feel, plenty of us have been putting it on our social channels.

Now, positive or negative comments on social don’t directly translate to votes, but they are a good yardstick—particularly for the younger demographics. This is why I decided to look at the top 200 most recently posted Facebook updates and Tweets mentioning ‘Brexit’ and ‘Bremain’ to see which side more people were for or against on social media.

This hasn’t been ‘just another’ election, the campaign has provoked and intrigued people of all ages in a way that seems to have captured a much wider audience than ever before.

When was the last time that they had to extend the ‘register to vote’ deadline? More than 525,000 people rushed to make sure they could have their say as Spotify adverts and messages on Facebook told people on the 7th of June that it was their last chance to register.

Because of the website physically collapsing with the influx of people, registration stayed open for another two days during which an additional 437,000 people were able to sign up to have their say. This can’t all be credited to Facebook, or online advertising that targeted a younger age group, but it definitely had an impact.

With one week left until us Brits have our say on whether we should stay or go, I took a look to see which way social media is leaning on posts about Brexit and Bremain.

The phrase that has been everywhere:

According to the top Facebook posts on the 14th of June, 55% of posts mentioning Brexit were for leaving the EU, 33% were against leaving the EU while 12% remained neutral or unsure about whether leaving was the right decision.

Almost three-quarters of the posts about Brexit were from men, while females made up 21% of the content followed by companies or named accounts at 7%.

Interestingly, females were most likely to post for Brexit (68%) followed by men (55%), while companies posted mainly neutral content (71%). 36% of the posts made by men were actually against Brexit while only 23% of women voiced a negative opinion. 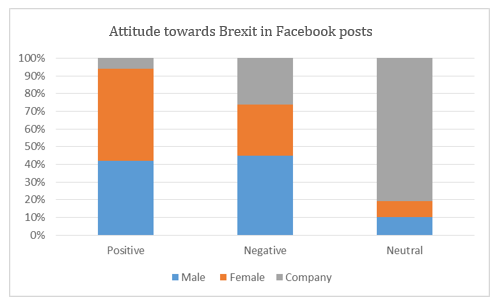 On Twitter, 50% of the Tweets that used #Brexit were for leaving the EU, 29% voiced an opinion against leaving while 21% of the Tweets were undecided or impartial.

How Brexit would bring chaos, fear and emergency measures in its first 100 days https://t.co/9tyZnQ3ee0 pic.twitter.com/W3D2IIiYFB

8% less women and 5% less men were talking about Brexit on Twitter than on Facebook. Again, men were most actively discussing Brexit dominating 68% of the Tweets, followed by females at 13% and companies taking 19% of the discussion.

Men were slightly more likely than women to Tweet for Brexit at 54% compared to 46% for women. Women were more likely to Tweet against Brexit (44%) than men at 35%. Interestingly, companies dominated almost 20% of the discussion about Brexit on Twitter, with 38% for, 30% against and 32% remaining neutral. 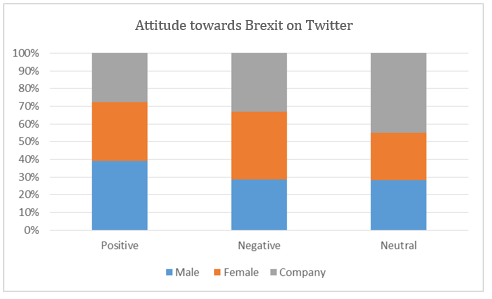 Bremain as a phrase has only recently taken off but still:

Less than 10% of people posting about Bremain shared comments that were against staying in the EU. In fact, 75% of the posts were positive, supporting the argument to remain within the EU, while 17% were impartial or undecided.

67% of the people talking about Bremain on Facebook were male, while 30% were female and the other 4% companies. A staggering 86% of the posts by women were about staying in the EU or against the Brexit argument, a sentiment shared by 70% of the men.

Companies were either for Bremain or remained neutral, (63%, 37%) while 11% of men voiced an opinion against Bremain, as did 5% of women, but this is significantly less negativity than was found against Brexit. 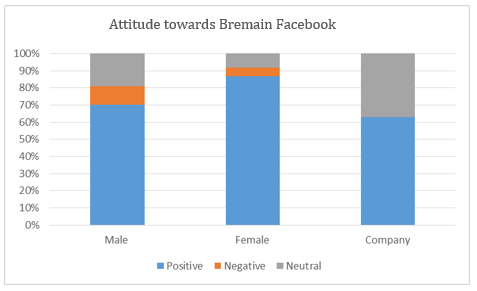 The Bremain activity on Twitter was slightly more neutral than the opinions on Facebook, perhaps because more companies were using the hashtags to join in the discussion. 64% of the Tweets were supporting the argument for Bremain, 26% were neutral while 10% were using #Bremain to support the exit argument.

Over half (55%) of the people talking about Bremain on Twitter were male, a quarter were female while the remaining 20% were companies. As with Facebook, women shared the most positive arguments for remaining in the EU at 76% while 66% of men had the same stance.

Companies primarily either expressed an impartial tweet or argument for the remain side of the EU referendum campaign. Arguments against Bremain weren’t that prominent as only 8% of both men and women voiced an opinion on this side. 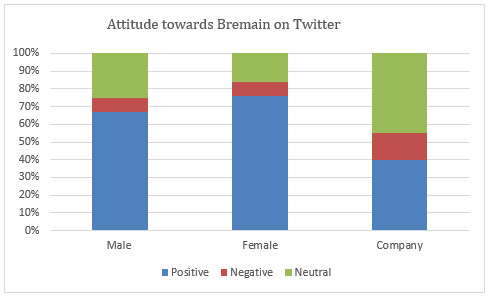 How will the vote go?

According to social media, there is a more positive response (70%) on the Bremain side of the referendum than on the Brexit (53%). 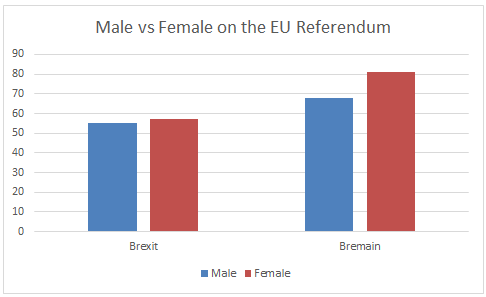 While the data covered in this blog is only from social media channels, the surge in people registering to vote last minute voters who fit the 25-34 category are the most likely to use social channels such as Facebook and Twitter where this data was mined.

At the moment the polls say Brexit, but history suggests as the vote draws near we will veer towards the status quo and Bremain. Whatever happens, the edge that EU positivity has in this sample suggests we’ll be waking up in Europe on the 23rd of June.