Pictures have become a huge part of everyday life. In 2014, it was reported that people uploaded on average 1.8 million digital images per day, that’s 657 billion photos per year. This change in behaviour has come from the evolution of technology, the first camera phones released in 2000 could only store around 20 photos with a resolution of between 0.11 and 0.35 megapixels. Today, the most recent smartphones have the same functionality as a DSLR with 12-megapixel lenses, auto-focus, image stabilisation and built-in editing software.

Another big contributor to the volume of online images is Instagram. The social network has amassed 1 billion monthly worldwide users, making it one of the most popular. This growth hasn’t gone unnoticed by search engines and now image search is providing business with more opportunities than ever before.

Surprisingly, Google wasn’t the first to market with image search. Tin Eye has offered reverse image search since May 2008. However, Google has since overtaken the competitor by investing more time, resources and money into development. 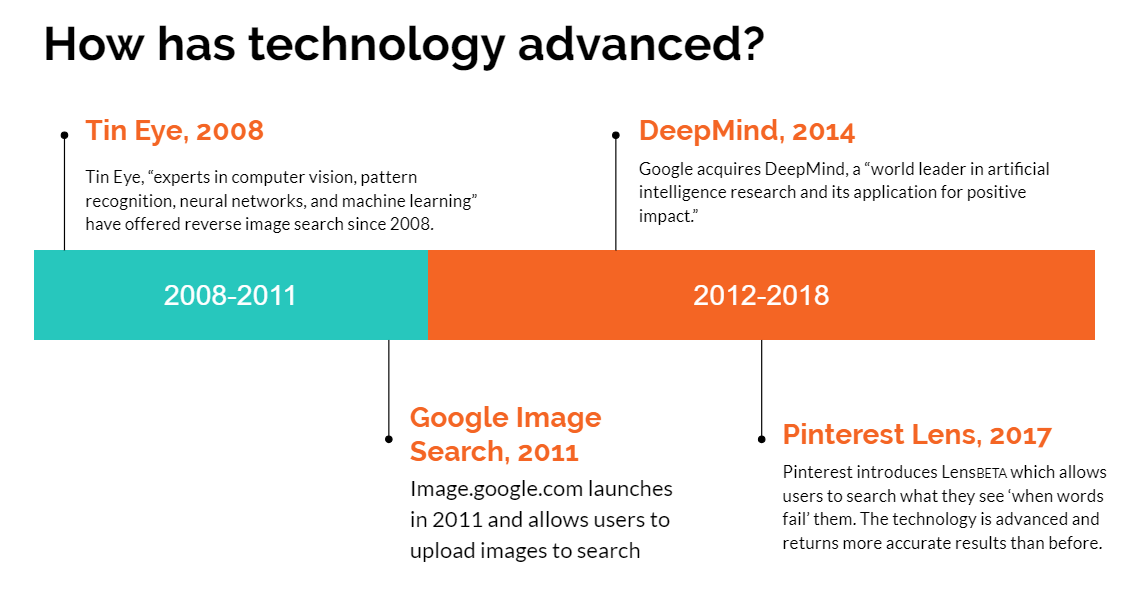 How image search is currently used

Research by Moz in 2017 found that image search now makes up nearly 30% of all searches on Google.

Back in February, Google made some big changes to the way their image search functions. These were to remove the ‘view image’ button and the ‘search by image’ button with the aim of helping connect users with useful websites.

Today we're launching some changes on Google Images to help connect users and useful websites. This will include removing the View Image button. The Visit button remains, so users can see images in the context of the webpages they're on. pic.twitter.com/n76KUj4ioD

However, these changes were also brought about due to a settlement with Getty Images, who argued that the search by image was enabling piracy by helping users search for an unwatermarked version of a specific image. Despite removing this feature, Google still shows thumbnails of related images.

One of the first social media platforms to utilise image search was Pinterest and in 2017 they took image search to the next level with the introduction of Pinterest Lens. It was the first software that utilised camera search to recommend ideas based on offline images. One year on Pinterest reported 100% year-on-year increase in Lens users, with 600 million visual searches made every month.

Users are finding new applications for the software, such as searching for recipes based on items reduced in a supermarket or using Lens Your Look to find your perfect style amongst some 16 billion style Pins. Not to mention, through their partnership with ShopStyle, Pinterest can offer over 5 million shoppable product Pins across 25,000 brands.

ASOS introduced image search as part of its iOS update in late 2017. The eCommerce giant reported that 80% of its 5 million UK-based customers shop through mobile devices, spending on average 80 minutes per month in the mobile app. In response, the company sought a new way to help users find the perfect product quicker and easier.

ASOS won’t be stopping anytime soon, with more technology investment planned. In an interview with Forbes, they announced plans to grow the 900 strong tech team by an additional 200 employees in the next 12 months, focusing on Artificial Intelligence (AI) powered recommendation engines as well delivering a faster, more innovative site.

“We’re thinking about how do we use these devices in a way that is natural and contextual to how our 20-something customers live their lives. They go everywhere with [their smartphones] – so how can we make sure we give them an experience they are expecting?”

Image Search and Beyond

Image search is just the tip of the iceberg. Technology is advancing rapidly and is being applied across industries to improve processes, from finger-print recognition on your Apple device to facial recognition and the introduction of Augmented Reality to improve the user experience of online shoppers.

We’ve seen how facial recognition can speed up processing through airport arrivals and the UK now has over a hundred e-gates in use across 18 airports. First tested at Manchester Airport in 2008, the e-gates scan passengers' faces and measures the likeness against the photographs digitally stored on their passports chip.

Now a US-based low-cost airline is going one step further. JetBlue is trialling a new paperless self-boarding process. It’s the first airline in the US to integrate with US Customs and Border Protection (CBP) to use biometrics to verify customers at the gate prior to boarding without travel documents. Passengers will be required to use the custom-designed camera stations near the gate, these will cross-reference the image against the passport, visa or immigration photos on the CBP database.

KFC customers in Hangzhou, China can now pay with a smile. Customers place their order using one of the self-serve screens, similar to the ones we have in the UK. Then if they have signed up to the Alipay app the 3D camera scans the customers face, verifying their identity before processing the payment.

Augmented Reality (AR) is defined as ‘the integration of digital information with the user's environment in real time’. Not to be confused with Virtual Reality, which creates a completely artificial environment, AR uses an image of the existing environment and overlays new information on top to alter its appearance.

International beauty giant Sephora has embraced AR since 2016 when they launched their Virtual Artist enabling users to try on lip and cheek colours. Since then they have implemented eyeshadow try on and even false-lashes. They have even combined this with the use of AI to create a colour-match technology.

"Live Tutorials are a revolutionary new way to learn new application techniques and trends, on your own face, one step at a time"

Why it all matters?

Historically it has been difficult to differentiate between referral traffic from Google Image and Google Search.

Last month, Google announced it was changing the URL for Google Image search to https://images.google.com. This is good news for marketers as web analytics software can now precisely track where the traffic is coming from, especially as paid search is now creeping into image search results.

All businesses need to start factoring image search into their SEO strategy. This can start with image names, keyword focussed alt text and placing images around relevant text on site.

We’ve seen how AR and Image Search can really enhance the user experience and help consumers in the third-stage of the buyer journey, consideration and product evaluation. A positive experience at this stage can often result in a purchase but will also help build brand loyalty.

Between Image Search, AI, AR & VR the possibilities and applications are endless, and it can be difficult to know where to look next when technology is advancing so rapidly.

It’s important to consider your industry, but crucially your customers before investing in any tech. Ask yourself ‘will it actually help our customers?’. Consider your customer personas, for example, image search would be great UX for ‘Millennial Hannah’ looking for the perfect date-night style, but ‘Mr Greenhall’ looking for a new drill online probably wouldn’t appreciate the technology.

This blog post was inspired by a whitepaper ‘Mindshare Futures Trends 2018’ created by Mindshare World.