Use Your Words | Venn Digital

Words can be tricky, especially English ones. Our language has almost double the amount of words that French does and a significant amount more than German.

Our words have been added to, sculpted and changed by the new languages that we have incorporated from centuries of invasions, new rulers and the exploration of foreign lands. It may seem like a mammoth task to keep up with all the changes, but this doesn’t mean that learning the language should be a problem.

Studies show that bilingual children, those who learn more than one language at a time, pick up both just as well as each other. It’s also been found that children who learn a non-alphabetic script, such as Chinese, learn to write at the same pace as those who learn an alphabet.

Despite this, there are some words that are consistently misused in conversation. Usually, this isn’t through any fault of the speaker but through a proliferation of misuse by society. In other words, if enough people use the wrong word it comes to be seen as the right one.

The meanings and pronunciations of our words may have been through a lot, but that’s no excuse. Here’s my list of some of the most frequently misused words and their correct meanings:

This is often used to describe someone who’s a little bit crazy. To be fair, you can see why people think this, but as anyone who’s watched the show ‘The Mentalist’ will know, it actually means someone who seemingly has the ability to read minds.

I have my doubts as to whether they can actually read minds, but they definitely know how to correctly use this word.

So, it’s not the meaning of the word that people get wrong here, it’s the grammar. Technically, data is plural (the singular being datum) and should be used with plural pronouns: ‘the data are’ rather than ‘the data is’.

To be honest, data is so engrained in our language as a singular word that hardly anyone will call you up on using it this way and you do sound like a bit of a pillock saying ‘datum’. I guess this is just me being a pernickety linguist.

The incorrect usage of this word gets picked up on quite often and we probably have hipsters to thank for it being used wrongly. In a lot of cases it is used to mean some kind of symbolic bad luck, something that’s a bit out of the ordinary or even in place of sarcasm. But really, if something’s ironic, it’s the opposite of its literal meaning.

So you could say: “I’m feeling great today!” when really you’re sat slumped at your desk with a stinking hangover from a party the night before. This is close to sarcasm, but it’s a fine line. Irony can also be applied to situations when the outcome is the opposite of the desired one. The Titanic being marketed as unsinkable is a pretty good example.

Most people know what an acronym is, ‘words’ such as ‘asap’ and ‘lol’.  Some acronyms have even gone a step further to become proper words, examples are ‘scuba’ (Self-Contained Underwater Breathing Apparatus), ‘radar’ (RAdio Detection And Ranging) and ‘laser’ (Light Amplification Stimulated Emission of Radiation).

However, sometimes the distinction between an acronym and an initialism is lost.

An acronym is an initialism that is said as a word, such as the examples above.

An initialism is a series of letters that are pronounced as letters such as ‘F.B.I’ (Federal Bureau of Investigation) and ‘C.O.P’ (Close Of Play).

Now you don’t have to be like this plucky F.B.I agent when making your way around this word choice.

This is one of the most common words that people get wrong, albeit more often in spoken language than in written.

An asterisk is the little star icon you could use to hide expletives like these:

Asterix is a character from a popular French comic written by René Goscinny. 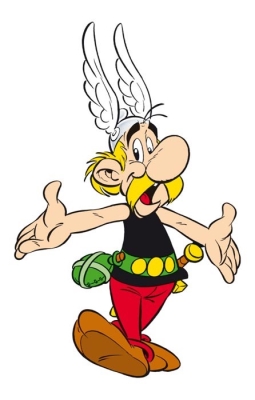 So, now you know the right usage for at least five words. That’s a start, I guess! With this knowledge you shouldn’t ever upset any linguists by misusing them again. And if I ever catch you making these mistakes again…