“Facebook Advertising gives you great traffic to site numbers for a much cheaper price than Google or Bing!”

Sure, Facebook clicks can be much cheaper than Google clicks, but are clicks and traffic always the same thing? Let’s dig a little deeper into the numbers.

Here’s a quick breakdown of one of my recent multi-platform accounts:

From just looking at the data you can see Facebook clicks are almost £7 cheaper than their Google counterparts. Facebook ads however are very similar to the Google Display Network in the way that they are set up and targeted. For equalities sake, these are the same results with the GDN included as well:

Now GDN is cheaper still, but we aren’t seeing the huge gap that exists between Facebook vs Search. Before going any further, it’s important to note that this data is pulled directly from the different platforms’ interfaces. If you’ve used Facebook or any other social media based advertising you’ll know that there is a problem with taking clicks at their face value.

The clicks that Facebook say I’ve acquired for £0.50 a pop are actually much different to the search clicks we received. Facebook and other social media platforms use a system where if a user clicks anything on your promoted post, content or ad then you could be charged for a click. This means that if a user views your profile, clicks your hashtag, clicks your image etc. you could it will be counted as a click and you will be charged.

You could then turn to another metric, such as link clicks, which cuts a chunk out of your click volume and describes itself in the Facebook Advertiser Help Centre as:

“The number of clicks on links appearing on your ad or Page that direct people off Facebook as a result of your ad.”

Surely this gives you that all important traffic to site number you’ve been looking for, right? Unfortunately, this doesn’t seem to be the case. At the moment I write this there seems to be a lack of precision within social advertising’s reporting systems, meaning that PPC account managers are using other methods to ensure they get as close to an exact read out as possible.

One of the best ways to do this is to create a unique UTM code. Essentially, when you create these individual URLs you are telling Google Analytics that anyone who clicks the link is part of a special campaign, which is listed like any paid activity in the below section: 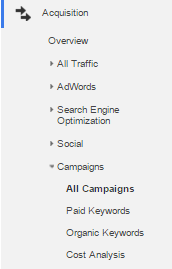 This is a very basic way to see the actual traffic coming from ads and URLs you’ve created. This data is still not always going to be 100% correct, but it does give you much more visibility on who actually clicked through from your social ad than the social platforms themselves.

Now you may have got to this point and rightly be thinking, “but how do I see where users have gone once they have landed on my page?!” Well fear not, because any UTM code you create can also be put to use as a segment. If you keep a track of what you put in each field in the UTM creator you can then add this into the segments area at the top of Analytics and fill in the fields with something like this: 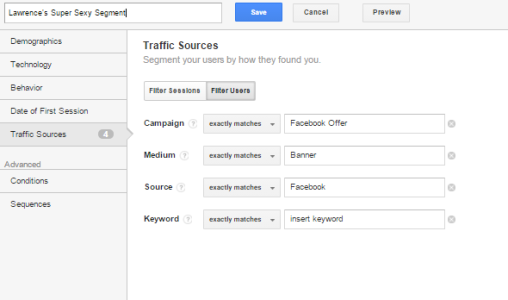 What this enables you to do is go from seeing just the UTM traffic to seeing where users go after they land on your page. This information is vital and can help you to track conversions much more conveniently.

After all that UTM jargon, we now arrive back at the results. The first indication from Facebook’s UI was that we obtained 364 clicks for an average CPC of £0.50, but we can now see the actual traffic to site:

By applying the UTM method of tracking to paid social advertising, you can see that even when looking at link clicks there is still a drop off to the actual traffic that has come to site. This particular campaign had high competition on a majority of its keywords, so even when looking at that price increase in the Facebook data it is still the cheaper option overall.

So, don’t just assume that clicks equal traffic, or your record breaking paid performance will soon be disputed. To summarise, make sure you can track the traffic you’re bidding on, create a custom UTM to spare yourself a headache and clicks in Facebook don’t always mean the same as they do in AdWords or Bing.