Venn were approached by Budweiser Brewing Group with the prospect of planning and implementing a digital solution for a nationwide issue. With the closure of pubs, bars and restaurants in March 2020, due to Covid-19, millions of people working in these establishments were stuck with gallons of unsaleable or spoilt beer and cider. Together we needed to create a platform that would allow these venues to claim for the duty already paid on their liquid, and a way for the brewers to get their kegs back, in order to replenish in time for the reopening of the free trade industry. This was a purely digital response to a large scale industry crisis and one we felt compelled to support.

What started as an initial idea from Budweiser Brewing Group, soon became the go to solution for the majority of the industry with a total of 24 brewers using the platform for claim approval and processing.

"We began working with Venn Digital prior to the roll out of what was to become the benchmark solution for the UK On Trade. Venn were instrumental in helping Budweiser Brewing Group translate both the operational complexities and time constraints of the task into a simple user friendly user platform. The team were upbeat, highly resilient and clearly knowledgeable in their area of expertise. During the industry scale up, the team again showed their ability to act with pace bringing together the leading brewers & trade body behind a single solution and successfully deploying to the trade." 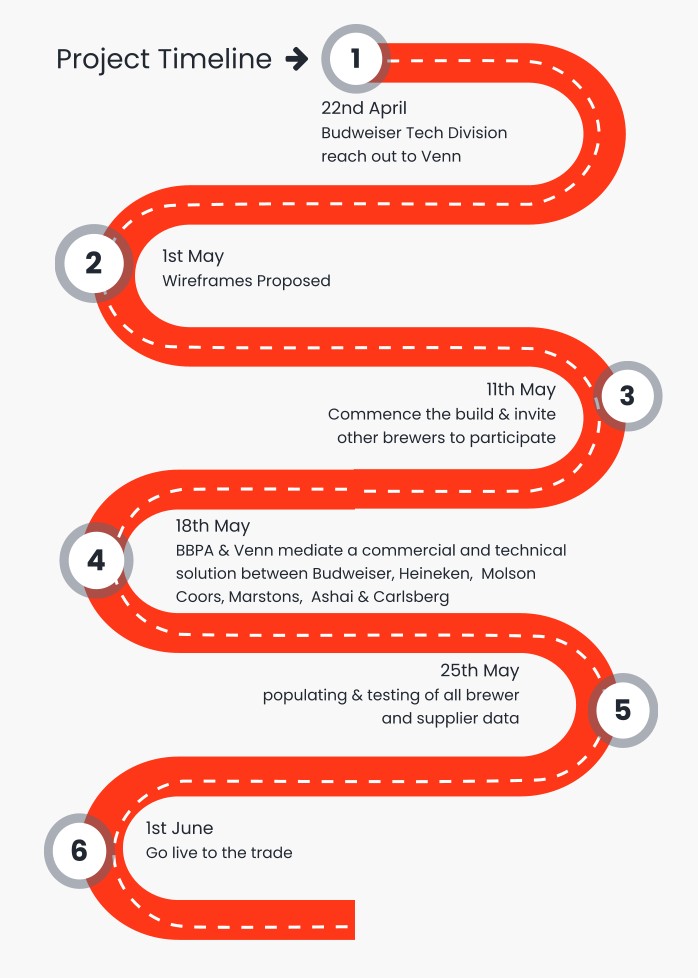 A collaboration of the industry

Together with the BBPA, the breweries agreed with HMRC that they would refund the duty, but clear evidence of the kegs and their destruction needed to be logged. Our challenge was to build a valid and secure way for each brewer to receive their own data and not a competitors. The reality of selling through wholesale suddenly laid bare the unfolding challenge, the breweries simply didn’t know where their kegs were, and there were no industry wide keg labelling standards!

The breweries for the first time in their history laid down their rivalries and worked daily with the team at Venn to negotiate a very complex challenge that had never been done before.

“Venn have been impressive partners to work with on the Return Your Beer project in tackling an unprecedented challenge facing the UK beer industry following the Government's decision to close the on-trade. They instantly 'got' the brief, evolved with it as we all got to grips with the numerous complexities that emerged, and showed real creativity and solution focussed thinking. Engaging with many members of their team throughout as the project grew, they all shared the same characteristics of can-do attitude and focus on delivery (and hid very well the fact that this was a beast that we all under-estimated at the outset!) Working with Venn has allowed brewers of all sizes across the industry to unite behind a common platform to solve the same problem for customers.”

What did it take?

The considerations were vast, but time didn’t allow us to plan every detail or prototype as we usually would. Our agile approach ensured data, GDPR, security, server capacity, testing, guiding the pubs, mobile first, multiple claims, evidence, storage, fraud prevention were tackled individually and proactively.

Digital, the collaboration between brewers and hours of dedication from the team at Venn have been imperative to the success of this project. Driven by the huge responsibility on our shoulders to help such a critical industry and all of those affected, our team replied to over 7000 enquiries, offering advice and guidance to users of the platform in this difficult time. Our dedicated support desk made sure to respond to all user enquiries within 24hrs, offering advice and technical support during a very stressful period.

It’s been a challenging year, and the fight is by no means over. We still have a huge challenge ahead of us, but we are proud to have played our small part in the rescue mission for one of Britain’s largest industries. We wish all those affected the best of luck and hope to see you all in the pubs again soon!

"It's been a privilege to be a part of such an important project. Working alongside Budweiser Brewing Group, we were able to do our part for the industry, taking on a challenge that was affecting so many lives and businesses. This year has taught us the importance of empathy and team-work, and that is what this build was about, combining the power of different industries to create a solution for those in need. We look forward to our continued parternship with the brewers and wish the free trade insudstry the best of luck for the future"

For those interested in learning more about what it took to make this project happen and the results we received from this web build, take a look at our case study.