It’s time to face the facts. The election is no longer door-to-door, it’s smartphone to smartphone.

Although social media sites such as Twitter were around at the time of the last election, over the past few years their popularity has skyrocketed. By the end of 2013, Twitter alone had 12 million active users in the UK, a number that is expected to reach 15 million by the end of this year.

When so many people are online, readily refreshing their feeds for the latest bit of news or gossip, it seems that the key to winning this election might be found in these instant networks.

With programmes such as ‘The Last Leg’ securing interviews with Deputy Prime Minister Nick Clegg through a tweet, it is not hard to see why this election has been called the first ‘social election’.

In the last 24 hours before election voting begins, there seemed no better way to get an overview of this social election than through the magic hashtags: #GE2015, #Labour #Conservative and #LibDems.

It will come as no surprise that the central hashtag #GE2015 has been getting a lot of use lately, with over 51 posts a minute using this tag at the time of writing.

Some are using it to criticise the parties and their policies:

This is tactical voting taken to the extreme. #GE2015 HT @JamieRoss7 pic.twitter.com/nkJPLDkcJh

Others are using it to mock the politicians or share funny stories:

Thought that bacon sandwich incident was a big deal? This guy needs cutlery to eat a hotdog in a bun #GE2015 pic.twitter.com/QEUu2dTuaR

Taking a closer look at tweets using the #GE2015 tag, the discussed topics ranged from the expected, such as housing and finance issues to ‘failure’, which was mentioned by 3.5% of the posts we studied. Over 3% of people also referenced the NHS and the policies surrounding this, while homophobia, gender equality and mental health received the least attention.

Along with these central issues were references to a certain woman who’s seemingly famous for nothing other than trolling and an unfortunate typo on a recent Conservative poster, (think election and then replace a particular letter with an ‘r’).

Given the proximity to the election, over 15% of people using the hashtag #GE2015 were tweeting about the polls and voting tomorrow. These discussions lend themselves to the communal nature of Twitter, where thoughts, criticisms and praise can be shared at the push of a button.

In the UK, 52% of Twitter users are male and with this fairly equal gender split, you would expect the tweets on the election to reflect this. However, when looking through the tweets using the tag #GE2015 the definite gender imbalance when it comes to discussing the general election became blindingly obvious – only 25% of people using the hashtag were women.

Looking more closely at the individual parties, Labour actually had the most engagement from women, with 27% of people tweeting about #Labour being women.

If you add up the followers of the big three (Conservatives, Liberal Democrats and Conservatives) Labour dominate by contributing 46%, with over 213,000 people following the party. However, with such a large following, it is surprising that they have only posted 35 tweets in the past 24 hours, perhaps the last chance they have at convincing voters.

This is the sort of tweet that you’ll find on the Labour feed:

Tomorrow you can vote for a Labour government, and kick David Cameron out of No 10. RT if you’re with us. pic.twitter.com/zrVCzSjKR0

With over 1,000 retweets, supporters of Labour are clearly engaging with this style of content. Indeed, when looking at the response rate to #Labour, this party had the highest positive response at 15% and the lowest negative response too, although this was only by 1%.

Interestingly, more women have been using the #Conservatives hashtag than the election #GE2015 tag, but men still dominate the discussions by 74%.

With over 156,000 followers, the Conservatives account for 33.6% of the main parties’ Twitter following. Their approach to posting on Twitter differs to Labour’s and the Liberal Democrat’s because it is much more media rich and policy heavy.

The Conservatives have posted 57 tweets in the last 24 hours, a lot of which look like this:

People are responding well to these tweets with 91% of those engaging with the #Conservative tag feeling positive or neutral towards the party.

When it comes to using the main party hashtags, the Liberal Democrat hashtag #LibDems received just over half the amount of activity as #Conservatives and #Labour. #Labour was discussed the most at 53 posts an hour, #Conservatives came second with 42 posts an hour while the #LibDems hashtag was used only 27 times an hour.

When it comes to the gender split in this election, the Liberal Democrats have the least amount of women engaging with their hashtag, as only 23% of those using the #LibDems tag are women.

With less than 20% of the main party following online (95,000 followers), the Liberal Democrats surprisingly dominate the other parties in terms of social activity. Indeed, the party has tweeted 182 times in the last 24 hours with posts like the one below:

#libdems are clear about what we will not compromise on in a hung parliament #GE2015 http://t.co/EALjJHR5VU pic.twitter.com/9D3XuiII7C

Although their following is small, the Liberal Democrats are clearly doing all they can in the last few hours before the election and have a 13% positive response rate to what they’re tweeting. 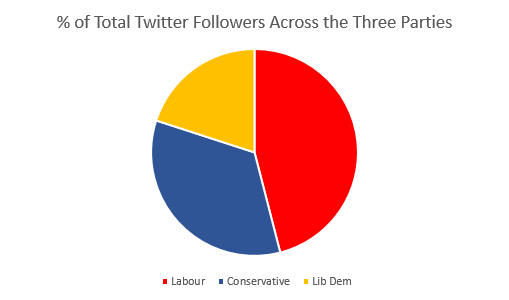 Looking at the number of tweets against the positive response rates to each party, it seems that playing it pretty cool might be the best way to get everyone, especially us women, on side.

Let’s say that due to unforeseen circumstances, polling stations don’t open tomorrow and all postal votes suddenly disappear. If rearranging it all sounded a bit too much like hard work and our next government was instead formed on the back of these hashtags, #Labour would be the winner.

“The ultimate rulers of our democracy are… the voters of this country.” http://t.co/SS0tTUdaUN #GE2015 pic.twitter.com/nqId9Qgh5a

When it comes to this election, your post, I mean vote, really does count.